Menu
Log in
Register
You are using an out of date browser. It may not display this or other websites correctly.
You should upgrade or use an alternative browser.

The Oxford vaccine can prevent the nCoV variant

The head of the pharmaceutical company AstraZeneca said its Covid-19 vaccine with its partner Oxford is effective against the new strain of nCoV that is spreading in the UK.

On December 27, Pascal Soriot, AstraZeneca's chief executive, said its vaccine researchers had found a "winning formula" that was effective at two doses, but did not disclose specifics.
The test results published in November showed that the AstraZeneca / Oxford vaccine was 70% effective, while the Pfizer / BioNTech and Moderna vaccines were 95% effective.
The UK government said the drug regulator is reviewing final data from AstraZeneca's third phase clinical trial. The AstraZeneca / Oxford vaccine is likely to be "green lighted" on Thursday and the start of vaccination in the UK in the first week of January 2021. 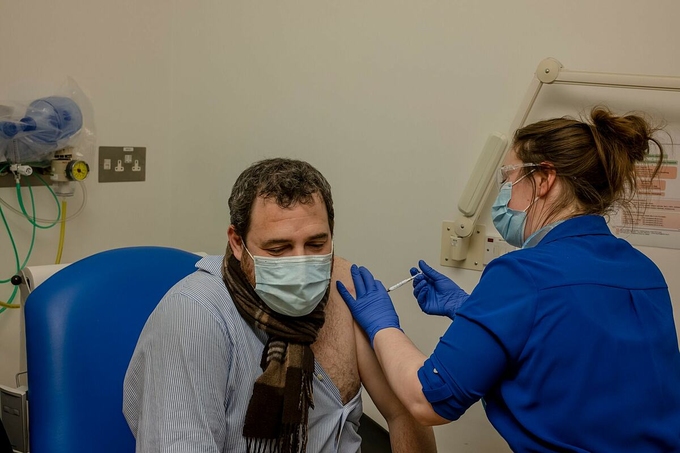 A volunteer in the UK received a trial shot of Covid-19 vaccine in November 2020. Photo: NY Times
As for the vaccine's potential against the new nCoV strain spreading in the UK, Soriot said he believes the vaccine is effective, but not certain and will be verified.

The strain nCoV in the UK called B.1.1.7, was discovered in early September, in Kent, southeast England. The new strain caused a quarter of cases in London in November, up two-thirds of all cases in December. According to the scientists, the new variant of nCoV is capable of transmitting 70% faster than before.
British officials say there is no evidence to suggest that this variant causes further illness or disables potential Covid-19 vaccines . The rate of "super infection" can increase the number of cases of disease, hospitalization, and overload of the medical system.
Eight European countries and many other countries around the world have recorded new cases of nCoV from the UK. More than 50 countries have banned all flights or tightened control of passengers from the UK to limit the spread of this strain.
UK, the sixth largest epidemic region in the world, on 28/12 recorded an additional 41,385 new cases and 357 deaths, bringing the total number of infections to 2,329,730 and 71,109 deaths. The country's health system is facing a crisis when the number of hospital admissions increases to a record 20,000 people.
You must log in or register to reply here.
Share:
Facebook Twitter Reddit Pinterest Tumblr WhatsApp Email Share Link
Top Bottom